Today presents an interesting challenge for investors.  Bitcoin has now reached the same price as gold.  You can buy one ounce of Gold or one Bitcoin.  For some the choice is obvious, Gold has been around for thousands of years.  Gold has history, Gold is universally and globally accepted.  For others, Bitcoin is the future.  Bitcoin represents the new culture of trade.

Imagine 3000 years ago if you were the first person involved in the first Gold transaction.  Your neighbor needed seeds, and had this shiny piece of metal.  You had more seed than you could use, and thought the metal might be from another world, have special powers, or just looked nice.  You made the trade, and started the world on a 3000 year love affair with Gold.

In 2013, Gold has become an impractical means of trade.  You can’t break it into smaller units without a scale.  Trade is now both global, and micro economic.  Gold can not meet those demands.  The price of sending Gold could exceed the value of the trade itself. 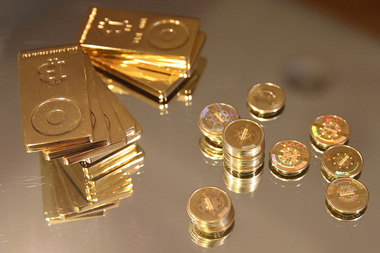 Bitcoin solves both those problems.  Bitcoin can be sent globally, instantly, and virtually free.  Bitcoin can also be broken in any fraction, by anyone.  You can send a nickel, or send a $1000 with the touch of a button.  Try that with an ounce of Gold.

The Bitcoin trade has only been around for about a year, 2999 years ago the same could be said about Gold.  Will Bitcoin have the same run as Gold?  Humans have a knack for adopting convenience, and what could be more convenient than Bitcoin?

Origin is relaunching its yield-generating stablecoin following a November … END_OF_DOCUMENT_TOKEN_TO_BE_REPLACED

Blockchain.com is the latest crypto exchange to delist XRP. … END_OF_DOCUMENT_TOKEN_TO_BE_REPLACED