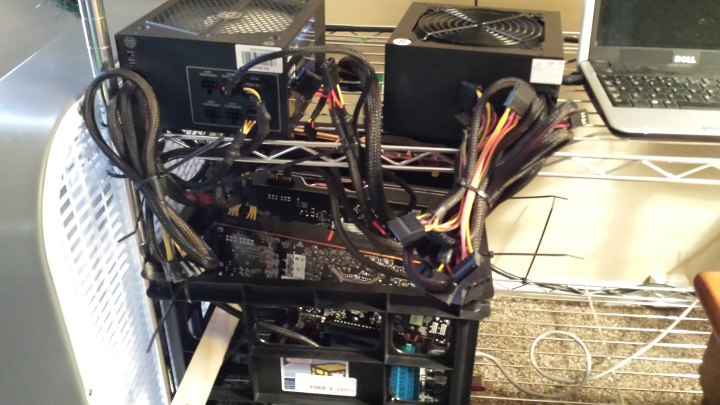 While I don’t have a mining rig like the one above(yet), I was able to successfully mine my 1st Hash yesterday. I then downloaded and installed an old CPU miner for my iMAC which I found from this old BitcoinTalk.org thread.

Install was extremely straight forward. I used the Binaries for Mac OS X: http://sourceforge.net/projects/cpuminer/files/pooler-cpuminer-2.3.2-osx64.zip (64-bit) for my iMac.

First, I decided to join a mining pool to get started so that I could see immediate results. For my 1st mining pool I selected Multipool, which allows you to mine the most profitable coin at the moment.

I then signed up @ Cryptsy, which allows me to trade any coins which I have mined through Multipool.

Here is my 1st hash on my 1st mining rig:

Origin is relaunching its yield-generating stablecoin following a November … END_OF_DOCUMENT_TOKEN_TO_BE_REPLACED

Blockchain.com is the latest crypto exchange to delist XRP. … END_OF_DOCUMENT_TOKEN_TO_BE_REPLACED